A Fork in the Road

atherine and Heathcliff were Sunday driving in the country. They were looking for a secluded lake they had been told about. As their vehicle crested a short hill, they came to a fork in the road. Catherine stopped the car. “Do you remember,” she asked Heathcliff, “If we were told to go left or right at this fork?”
Heathcliff couldn’t remember the directions. As he thought back, his mind wandered, and he came up with another logic puzzle.
“Cath”, he began. “Imagine there were a couple of guides here and they could give us directions.  Now, suppose one of them always told the truth, but the other one will always told a lie. You can assume that each guide knows whether the other is a liar or a truth teller.”“Finally”, he continued. “Let’s also assume that both guides know which road leads to the lake.
“The puzzle Cath”, he finished, “is to ask a single question of one of the guides and then determine which road to take.
_____________________________

Catherine knew Heathcliff could always distract her like this. She wanted to continue driving, and she was considering flipping a coin to decide which road to take. But, she was a little intrigued by Heathcliff’s puzzle. 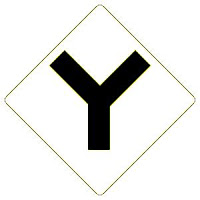 She couldn’t just point down a road and ask the first guide “Is this the road to the lake?” There was only a fifty-fifty chance the guide she chose would be the truth teller. So, that approach would be wrong as often as it was right. She wondered if there was a question that each guide would answer the same way. How, she wondered, would they answer the question “Are you a liar?” upon reflection, Catherine realized that both guides would say “No”. She also realized that both guides would say “Yes”, if she asked “Is the other guide a liar?”
Catherine felt that she was onto something, but she wasn’t sure how to proceed. She wondered, “What if I ask them something that I know is true?” “Does 2 plus 2 equal 4?” “That would identify the truth teller,” she reasoned, “But, I only have one question. What if I asked, “Would the other guide tell me that 2 plus 2 equals 4”?  Both guides would answer “No”.  Then, in a flash of inspiration, Catherine had solved the puzzle.
“Ok Heath”, I’ve got it, Catherine said. “I’d ask one guide if the other guide would tell me that the left fork led to the lake.” If the answer was “Yes”, I’d take the right fork and if the answer was “No”, then I’d take the left road.”
“Now” she asked, “Tell me the truth. Which way should we go?”
Posted by Unknown at 10:38